I am sure that you are familiar with a "scavenger" hunt game that you played with your friends when you were younger.  You were usually given "clues" or a "list" for certain random items and then you were sent out in teams to find these clues or items and then come back to the place where you were meeting at to share and explain how you found the clues and the items on the list etc.  And of course half the fun was getting a chance to explain to the others in your group of all the crazy experiences you all had when you attempted to gather or obtain all the items on your list!

Well, a Treasure Hunt is basically a Christian version of a Scavenger Hunt!  Only that instead of going out and finding items or clues such as paper clips, used bubble gum, or a beach ball - the "Treasures" that are found in this kind of scavenger hunt are ultimately People!   The goal of a Christian Treasure Hunt is to go out and encounter people for God in a fun way as you and your team may be led by the Holy Spirit.

There are probably a few different ways of doing a Christian Treasure Hunt.  But basically would usually be like this.  First, you would probably want to team up in small groups - say usually 2 to 4 people in a group.  Each member of the group or team would usually be given a piece of paper or something to write on.  Then, prior to going out, the group would take time to pray first.  Then, as led by the Holy Spirit, to write down any various "clues" on the piece of paper that the Holy Spirit may give each person.  The clues could be simple descriptive phrases, like "red shirt"  or "white hat" or "jogging pants" etc.  Or sometimes clues could be maybe other random things like location related clues like, names of restaurants, parks, shopping centers etc, or perhaps or other types random descriptors like "wheelchair" or "waiting for bus" and so on.  But basically the main point is to just listen to the Holy Spirit and then write down whatever you feel He is putting on your heart.  Then after everybody has prayed and written down their clues, the group would then compare all the clues from each of the team members, and then decide where to then go and look for these "Treasures". 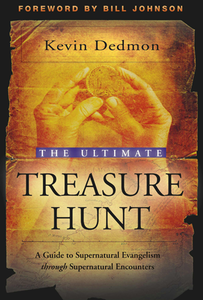 You can purchase the book - The Ultimate Treasure Hunt - by Kevin Dedmon  here:

We also have regional Forums as well.  You can post your interest in Treasure Hunting in your region and maybe you'll be able to connect with others in your area who also like to do Treasure Hunts!